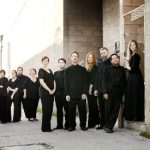 When I lived in Chicago, I was intrigued with the popularity of a shoppers’ chapel in the Loop that offered a mid-afternoon Roman Catholic Mass. Located midway between the fancy restaurants of Michigan Avenue and the bargain-filled department stores of State Street, the chapel drew a regular crowd of consumers laden with their day’s worth…

What does the future hold for City Ballet of San Diego? Could this admirable company celebrating its 20th anniversary take a big leap forward? Instead of restaging tired antique ballets, could it continue to build its contemporary repertory?  And if it tapped into adventurous new choreographers who push boundaries, wouldn’t the outcomes be more compelling… 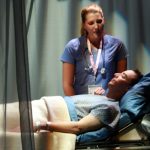 On the surface John Doe is about a man (Michael Nieto) who ends up in a hospital emergency room with no identification and apparently in a coma. He is cared for by one nurse in particular (Rachel Propst), who takes a liking to him without knowing anything about him. Also hanging about are five fairly stereotypical and one-dimensional men who are not seen by the staff but who watch the goings on from a set of waiting room chairs. A sixth character (Jane Lui), who it turns out, is John’s wife, flits in and out like a mental case, clinging to one or more of the men.

Protest Goes Another Round at the REP 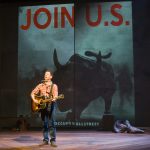 Last January’s version was clearly an “audience show,” with a fair amount of sing-along to what has become familiar music, mostly of the folk variety. All of the cast members were solid, but Mr. Crossland, a newbie to theatre, impressed with his tenor lead vocals – not surprising, as Mr. Crossland’s mentor was San Diego native John Stewart of the Kingston Trio. Somehow, though, the moment has passed. In January, we could empathize with a cast that had been assembled for a Pete Seeger tribute (Mr. Armstrong even looks a little like Mr. Seeger) and then had to revise suddenly when Mr. Seeger withdrew his support. We could root openly for the sympathetic comments about the Occupy movement. We could watch with studied horror as the Republican Party tried out an ever more conservative, anti-protest, set of presidential favorites.