Of course, pedagogy and performance are two different skills, but it is reassuring that those who aspire to teach are grounded in serious music performance. 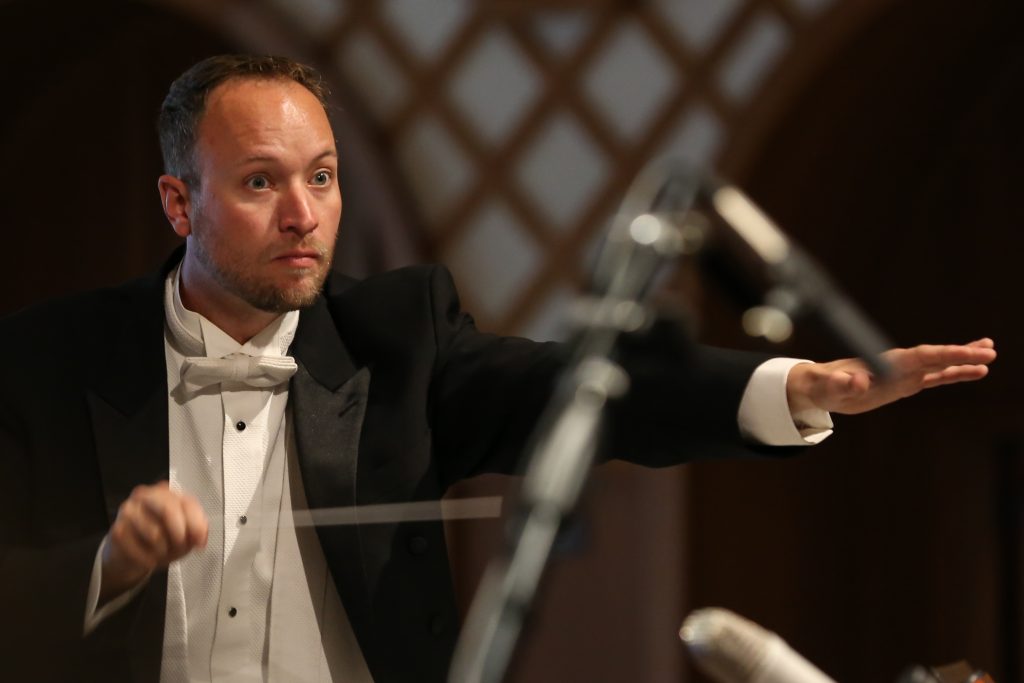 The concert was equally divided between the Wind Symphony under the direction of Shannon Kitelinger and the Symphony Orchestra directed by Michael Gerdes, with the university’s choral ensembles joining the Orchestra for Leonard Bernstein’s “Chichester Psalms.” Gerdes chose an Americana theme for his program, opening with Samuel Barber’s popular Violin Concerto (the first movement only) and complementing Bernstein’s “Chichester Psalms” with the rousing final chorus from his operetta Candide.

Orchestra member Ayrton Pisco handled the Barber Concerto solo with aplomb, displaying a spirited line, crystalline and deftly defined. I was impressed with the warmth and solid ensemble of Gerdes’ strings, a significant improvement over the last time I heard this orchestra and more polished than their university orchestra colleagues across town in La Jolla. For Pisco’s encore, he played Niccolò Paganini’s Caprice No. 1.

Two combined S.D.S.U. choirs, well trained by director Matthew D. Nielsen, gave a finished, cohesive performance of Bernstein’s prized choral work based on selected verses from the Psalms in the original Hebrew. Nielsen cultivated that transparent, blended sonority so admired by collegiate choral groups, and, in the opening of the third movement, the men’s sections floated long lines of exquisite tonal allure. While I admired the choir’s tonal color and rhythmic precision, their Hebrew diction could have been cleaner, especially in the opening movement.

With a fine, well-produced tone that shimmered gently in that cavernous hall, boy soprano Marc Kazmierowicz sang the gorgeous but daunting solo that opens the second movement. His opening phrases sounded tentative, but his confidence grew as he moved through his solo, and he clearly fulfilled Bernstein’s intention of portraying the youthful David composing Psalms to the plaintive accompaniment of his harp.

Gerdes chose wise tempos—Bernstein’s knotty choral fugue can be treacherous—and shaped each movement well. Perhaps because Copley is not Gerdes’ regular performing venue, he allowed his orchestra to overpower the large chorus in the loudest sections, a similar problem with the violin soloist in the Barber Concerto.

“Make Our Garden Grow,” the finale of Bernstein’s Candide, is arguably one of his most inspired creations, a conclusion I reaffirmed in January when I attended Los Angeles Opera’s splendid production of the work at the Dorothy Chandler Pavilion. With the assistance of eight strong singers from the university’s Drama and Dance Department’s musical theatre division, Gerdes closed the concert with this heartfelt secular anthem, in which the massed choir chimed in for the grand crescendo powered by the orchestra and eight soloists lined across the front of the Copley stage.

Many symphonic wind ensembles make do with orchestral transcriptions, but Shannon Kitelinger sagely finds compositions expressly written for his type of ensemble, works that exploit its unique sonic possibilities. Based on a traditional German chorale, David Maslanka’s moving 1989 “In Memoriam” trusts the robust brass choir with presenting the chorale, then expands its themes into a wide-ranging fantasia for the entire wind symphony, augmented by two contrabasses and the organ. Towards the end of this fantasia, Maslanka thins the texture to the organ, marimba, and elegiac clarinet solo that reprises the chorale. Kitelinger and the Wind Symphony gave a probing and inspiring account of this fine work.

Jim Bonney’s program-opening “Threnody” from 1988 also struck an elegiac mood, although its solemn, sustained lyrical thrusts were anything but dour. Subtle percussion effects including the slightly ominous tolling of the tubular chimes decorated “Threnody,” which members of the University Dance Company used as inspiration for their abstract modern dance “Nothing Primary.”  “Fanfare for Full Fathom Five,” John Mackey’s recent (2015) etude for brass and percussion assisted by organ certainly shook the rafters of Copley Symphony Hall. Members of the ensemble Westwind Brass augmented the Wind Symphony”s brass choirs, providing an extra level of brilliance and thunder to this impressively constructed fanfare.

Kitelinger ended the Wind Symphony’s half of the program with the short but powerful transcription of that final section of Ottorino Respighi’s great tone poem The Pines of Rome, “The Pines of the Appian Way.” This percussion fueled massive crescendo of a piece gave the Wind Symphony one last chance to flex its muscles and fill the hall with its vibrant sonority.

“SDSU Live Downtown” was presented by the San Diego State University’s Department of Music and Dance on April 8, 2018, at The Jacobs Music Center’s Copley Symphony Hall.