Opera NEO launched its summer season with a flashy, kinetic, cleverly updated production of that warhorse of operettas, Franz Lehár’s The Merry Widow. With a sumptuous orchestral score, a generous supply of hit tunes, and a plot no more (or less) fatuous than any plot found in the canon of comic opera, The Merry Widow has remained a staple of nearly every opera house when 99% of the operettas from that gilded era of Viennese excess have been long forgotten.

But what to do with a story of privileged European aristocrats fawning and pawing over an attractive, freshly minted wealthy widow? Fortunately, Long Beach Opera’s General and Artistic Director Andreas Mitisek came up with the idea of moving the plot to contemporary Las Vegas, making Baron Mirko Zeta, the conniving Pontevedrin ambassador to France, a Russian émigré entrepreneur who owns a cash-strapped, third-rate night club off the glittering Las Vegas strip. Turning Lehár’s libidinous aristocrats from 1905 Paris into striving, pompous émigré Russians infatuated with capitalism’s lure and the sexual freedom of today’s Vegas worked splendidly.

One of the lines—surely created for this production—cleverly captured their new situation. “In Russia, the Party always knew where you were. In Vegas, you always know where the party is!”

Patrick Murray’s opulent Russian accented English, as engaging as his mellow bass-baritone, and his smarmy flamboyance gave this crucial role its requisite panache. Anna-Lisa Hackett displayed the resplendent vocal allure and physical grace required of Hanna Glawari, the widow of the operetta’s title. Two seasons ago for Opera NEO, Hackett gave a sensitively crafted Donna Anna in Mozart’s Don Giovanni, and her self-assured Hanna revealed even more of her vocal riches and dramatic depth. Her account of the iconic “Vilja Song” proved both lustrous and touching. 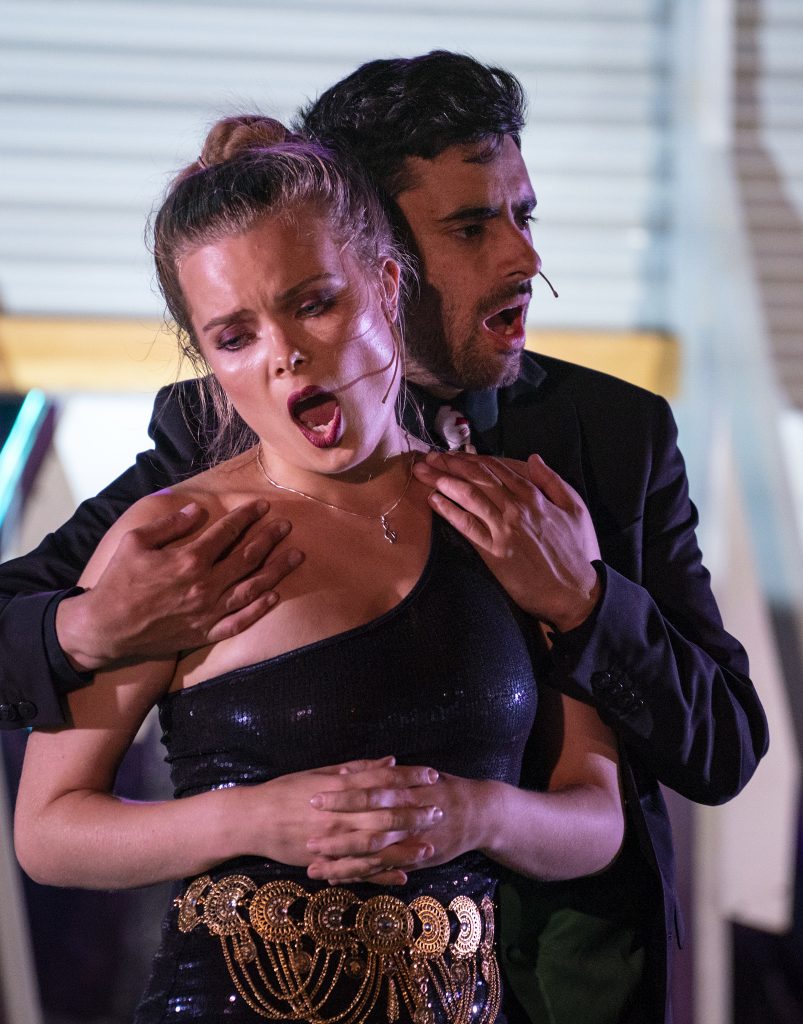 Bernardo Bermudez failed to convince me as the playboy Danilo Danilovitsch, the nephew Zeta works so hard to hook up with Hanna to use her money to save his failing casino. Bermudez’s powerful, confident baritone successfully carried him through all of the vocal requirements, but dramatically, I thought he was just treading water: his supposed compulsive attraction to the pole-dancing nymphets of Maxim’s Club and his final wooing of Hanna struck me as superficial. 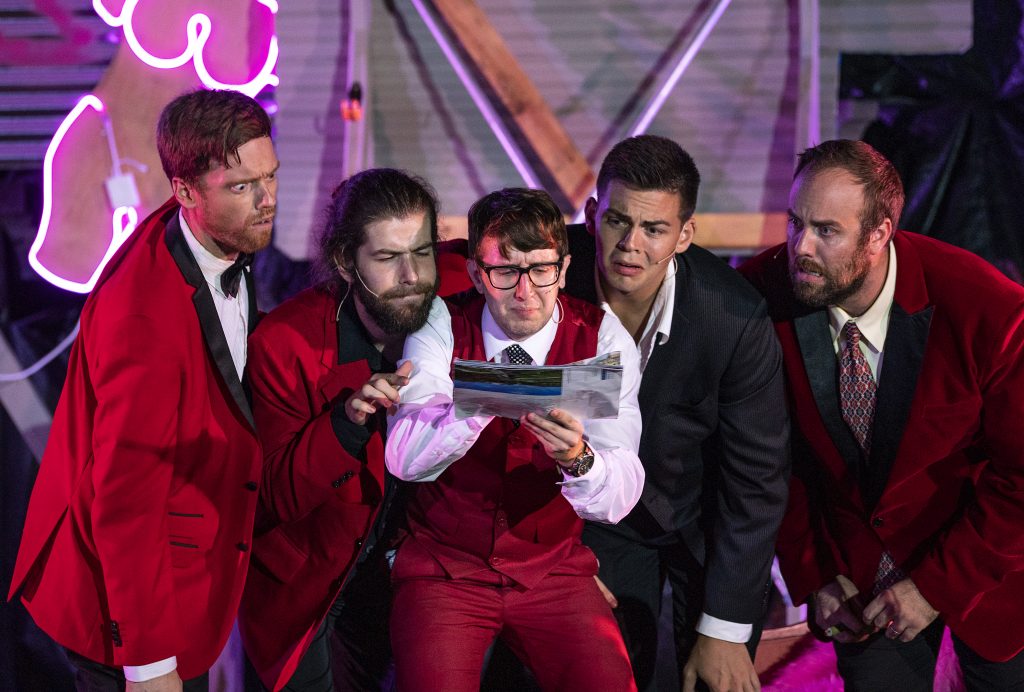 Their not so bemused wives, sopranos Madeline O’Meara as Sylviane, Alexandra Prat as Olga, and Emily Baker as Praskowia brought depth and vocal radiance to their roles. As the nerdy nephew sent to dispatch messages by one and all, Blair Remmers infused unusual energy into his abused character.

Stage director Mitesek maintained an admirable pace, effectively getting crowd scenes offstage quickly and placing singers on the very minimal set to their best dramatic advantage. I admired his pole-dancing grisettes and the S&M overtones in the trio by the black-vested sopranos in the last act. Amy Lawrence’s dance scenes, both ethnic and traditional waltzing, displayed ample grace and verve. Some of the boisterous antics of the males in the early scenes with Hanna struck me as verging on slapstick—I kept thinking of the Keystone Cops of silent films as these infatuated guys ambled amusingly in line across the stage.

Mark Kanieff’s simple unit set was only adequate, but I appreciate that a small company such as Opera NEO chose to spend its resources on its 36-piece orchestra with its ample string section to give Lehár’s rich score its due. Artistic Director Peter Kozma conducted his instrumentalists with an energized precision coupled with appropriate flexibility that the composer’s late Romantic style demands. For the chorus, Lehár composed a number of stirring numbers, which Brendon Shapiro’s choristers executed with elan. Overall, the singers’ evidenced a clarity of English that made the supertitles unnecessary, which proved a blessing since the text was too small to be deciphered on the opposite side of the audience from which they were screened.

With the gentlemen in bright red, white, or electric blue suits, Vanessa Stewart’s costumes enlivened every scene. Although Hackett’s sartorial ensembles appropriately outshone those of the other females, Vresca sported some fetching, sophisticated attire.

I must admit perceiving a certain congruence watching a production about émigrés striving to make it in America, with Hungarian native Kozma conducting the orchestra and Austrian Mitisek behind the scene directing the dramatic action. And I did not miss the original Paris setting or those imaginary pseudo-Balkan Pontevedrins. Fortunately, what happened in Vegas did not stay there but is on display at Opera NEO.

Opera NEO opened Franz Lehár’s “The Merry Widow” on August 2, 2018, at the Palisades Amphitheater, 6301 Birchwood St., San Diego. The operetta will be repeated in the same venue on August 4 and 12.